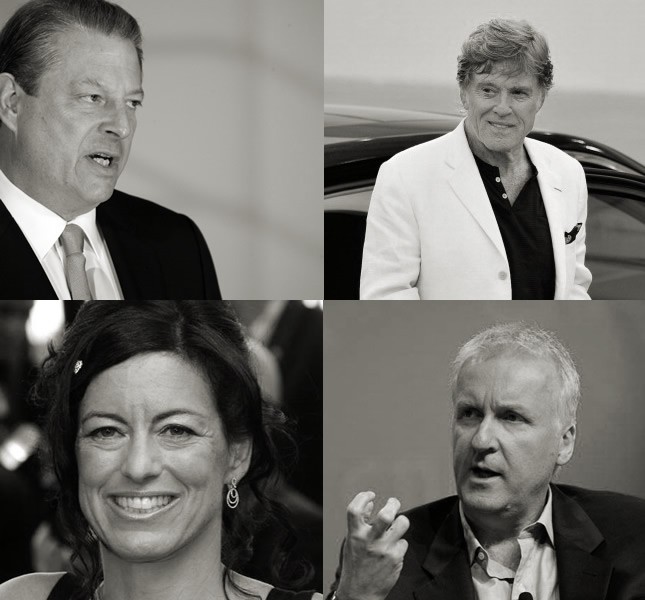 Leonardo DiCaprio recently said that he plans to take some time off from acting to “fly around the world doing good for the environment.” The irony in this statement was apparently lost on him. A single transcontinental flight is estimated to pump as much carbon into the atmosphere as a year’s worth of driving.

Leo is not just an environmentalist; he is a board member of the Natural Resource Defense Council (NRDC), one of the leading environmentalist groups in the country. We are used to greens telling us to cut our carbon footprint while building their second (or third) home. And we know that celebrity hypocrisy is rampant on a wide array of issues. But when these celebrities occupy powerful positions in one of the country’s most powerful environmental organizations it brings a whole new meaning to the term hypocrisy.

Al Gore is arguably better known for his environmental activism than the eight years he served as Vice President. Yet Gore owns a 20-room and pool house mansion in Nashville, Tennessee that used 221,000 kilowatt-hours of energy in one year–more than 20 times the national average of 10,656 kilowatt-hours. According to the Beacon Center of Tennessee, his utility bill would be roughly $30,000 a year, more than the median income of Nashville residents.

His private jet and limo use has drawn widespread criticism for hypocrisy, as did his $500 million sale of his television network Current TV to Al Jazeera – a media organization backed by Arab oil money. Gore even had the gall to go after other networks for being “sponsored in part by oil, coal and gas companies” in his latest book The Future: Six Drivers of Global Change.

Robert Redford has been harping on environmental causes for much of his life and has been a long-serving NRDC board member. He used his star power to narrate and finance numerous environmental documentaries and was even named one of Time magazine’s “Heroes of the Environment.”

But you would never know it by the way he acts. He opposed the introduction of an eco-village near his property in Napa while quietly selling lots for $2 million in the Sundance Preserve, profiting from the development of the pristine wilderness. And despite telling us to limit our flying and oil use, he has profited by narrating commercials for United Airlines claiming that “it’s time to fly.” Now that’s Big Green Hypocrisy.

James Cameron is a strong supporter of the NRDC, and his wife Suzy sits on the NRDC’s Leadership Council. James Cameron has extolled us to “live with less” and made the blockbuster film “Avatar” that promoted his environmental agenda.

But James Cameron does not walk the walk. He owns three adjacent houses in Malibu together boasting more than 24,000 sq ft of living space, ten times the size of the average US home. He also owns a helicopter, a Corvette, a Ford GT, a collection of dirt bikes, a yacht, a Humvee fire truck, and even a fleet of submarines.

Laurie David is the ex-wife of Larry David, the creator of Seinfeld and Curb Your Enthusiasm. With the help of his money, she has been a major environmentalist sitting on the NRDC board, producing Al Gore’s An Inconvenient Truth, and maintaining the blog StopGlobal-Warming.org.

She also is a Big Green Hypocrite. She has a 25,000 sq ft home in Martha’s Vineyard and regularly travels between it and her home in L.A. by private Gulfstream jet, which environmental journalist Gregg Easterbrook calculates burns as much fuel on one transcontinental flight as a Hummer SUV consumes in an entire year. Considering she’s been known to attack SUV drivers as “terrorist enablers,” her private jet use seems like the height of hypocrisy.