Laura Fronkiewicz is one of the leaders of Local Control Colorado and led the campaign to ban fracking in Broomfield, CO last year. Fronkiewicz, originally from New York, has proudly declared herself a “Moveon.org #Frack Fighter.” Fronkiewicz’s anti-fracking campaign has received funding for its work from Moveon.org, a left-wing advocacy group that has funneled millions to liberal Democrats and causes. (Moveon.org is the same group slammed by the Anti-Defamation League after it compared George W. Bush to Adolf Hitler.)

Fronkiewicz teamed up with Local Control Colorado coalition member Food & Water Watch to pen an outlandish op-ed in the Denver Post arguing that federal legislation to allow the export of natural gas would mean Colorado would be “fracking for China.” She’s no stranger to making baseless statements about fracking. Fronkiewicz told Climate Central,  “We believe (fracking) is relatively untested and we believe there is evidence there is significant problems and significant risks.” Yet fracking has been tested and safely used in the U.S. for over 60 years and even former EPA Administrator Lisa Jackson has testified before Congress, “I’m not aware of any proven case where the fracking process itself has affected water.” 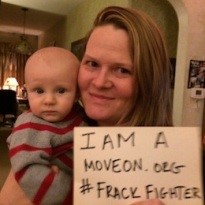